Michal Kalkowski is a Research Associate in the NDE Group at Imperial College London working for the ADVISE project. He obtained his PhD in Sound and Vibration from the University of Southampton in 2015, with the thesis on using structural waves to remove accretions from structures. He completed several projects as a post-doctoral fellow at the University of Southampton before moving to Imperial College London in 2017. His research interests focus on the application of mechanical waves to the characterisation and interrogation of structures. A significant proportion of his work is on developing analytical, semi-analytical and numerical models for wave propagation in a variety of contexts, such as piezoelectric waveguides, fluid-filled buried pipes, or coarsely-grained and textured polycrystals

Owing to a complex solidification process, the microstructure of austenitic stainless steel welds consists of long columnar grains with varying preferential orientation. Ultrasonic inspection of such welds has always been a challenge, with grain scattering and beam deviation originating from the preferential alignment being the main obstacles. Whilst the former may be to some extent circumvented by reducing the frequency of inspection, the latter requires some a priori information on the structure of the grains (essentially, the orientation of the stiffness tensor) within the weld. In this talk, we summarise principles of ray-based inversion for austenitic welds aimed at determining local grain orientation and tensor from time of flight measurements. The method is demonstrated using several examples of typical microstructures, including a grain-scale model based on an EBSD scan of a weld. The improvement to the TFM images brought by orientation maps derived using a variety of ways explored in the ADVISE project confirms their potential to improve array inspection. We also outline the estimation of average grain size in a weld, based on attenuation. The talk concludes with a short discussion about the challenges and outlook for future work and application. 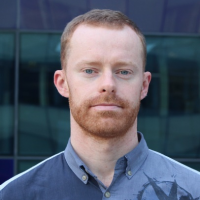