Passive Guided Wave Tomography for the monitoring of corrosion in pipes

The detection of defects in pipes by non-destructive testing techniques plays a crucial role in the prevention of rupture or leakage risks in several industries (petrochemical and nuclear in particular). Structural Health Monitoring (SHM) is a recent approach that consists in instrumenting a structure with permanent sensors to monitor its health status throughout its life. Guided elastic waves are particularly suitable for SHM applications on thin structures (such as plates, tubes or tanks) thanks to their ability to propagate over long distances.

Our group works since several years on an original SHM approach for the detection of corrosion in pipes called "guided waves passive tomography". This technology is based on the combination of guided elastic wave tomography algorithms and a passive method such as the so-called ambient noise cross-correlation. It allows to obtain absolute and precise maps of the thickness of an area surrounded by a distribution of sensors, without emitting waves, simply by analyzing the elastic noise that exists naturally in the pipe (due to vibrations, turbulences of the moving fluid, etc.). The type of corrosions imaged by this technique are thickness losses on extended areas.

In this communication we first present recent advances in the subject. We illustrate the performances of the technology on several experimental active and passive tomography results exploiting ambient noise induced in a fluid test loop. 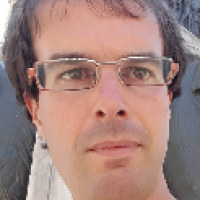